While visiting the Cornish Coast on holiday, last week, I can never stop looking out for applications where wheels and castors can be used.  This does of course annoy all other members of the family but they have got used to it now.  I am often walking down the street or out shopping and even watching TV and I will shout out “there’s some of my castors”!

Anyway one evening while crab fishing on the Harbour, a load of young people started to approach where we were standing.  They were all dressed in various types of wetsuits and waterproof clothing.  Some where pulling carts behind them which must have contained kit of some kind.  Obviously my focus became on the castors fitted to these carts and I immediately start trying to identify them.  The carts were designed a little like wheel barrows only with two fixed castors attached to one end and a long handle on the other.  The castors were a mixture of rubber tyred castors and some where just nylon fixed castors.  I have seen these types of trollies before and I identified them as the type of trollies than fishermen use at the side of the river banks.

It turned out that these people were all from the local sailing club and they were all heading for an evening on the sea.  My children wanted to watch so we followed them to the slipway.  This gave me another opportunity to identify more wheels.  Every one of the boats was mounted on a launching trolley.  The launching trollies had two wheels in the centre, like a rocker trolley, and some of them had a jockey wheel fitted as well.  There were various types of wheel fitted to the launching trollies; some had pneumatic wheels fitted and some had solid rubber wheels fitted.   A small selection of the launch trollies also had some of the sand hopper wheels which enabled them to push the trollies over soft ground. 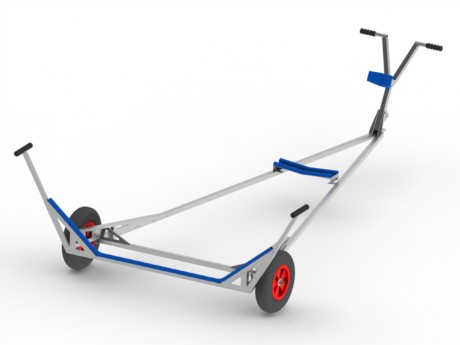 We spent some time watching them launch the dinghy’s and then sail of into the sunset before we returned to the crab fishing.

Atlas handling uk stocks a wide range of pneumatic wheels and soil wheels that are suitable for these types of applications.