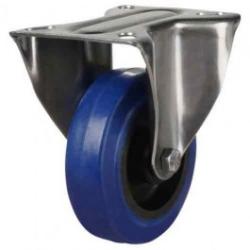 So the blue non-marking castors are probably one of the most popular castors we do, aside from heavy duty castors.
This range we're showing you here is from our SSDRBN series of fixed castors. Made from a non-marking blue elastic rubber wheel housed in a stainless steel fixed bracket.

Able to support loads of up to 150kg per castor they're suitable for a wide range of applications. They're not what we would personally call heavy duty as in comparison to our heavy duty castors the load is quite low. To the end user though this may be classed as a heavy duty castor in terms of what they're using them for. They are also available in a variety of wheel diameters and styles which does change the load capacity, this was based on our 80mm blue elastic non-marking stainless steel fixed castor.

The stainless steel bracket on this fixed caster wheel makes it particularly useful in the catering & hospitality industry where they may be subject to getting wet, You may have seen castors before on catering equipment that have become tarnished and rusty, I've personally seen it myself and it's purely because the wrong castor has been used for the job. We would always advise using a stainless steel castor anywhere that it may become wet. Being stainless steel it won't become rusty and tarnished as opposed to a castor that is not made from a stainless steel assembly.

You may be thinking "Well i don't really mind a rusty castor" That's great, not many people would mind a rusty castor, particularly if it's not going to be seen, It's not all about the aesthetics though, when the castor becomes rusty it will stop performing as well as it should and could actually end up breaking over time causing whatever it's supporting to fall, Not something we imagine health and safety would be particularly pleased about. Theres also cost to take into consideration. If you're going to be using a standard castor around moisture it is going to rust, that's just a fact. This means though, that you'll be replacing that castor more frequently than you really need to. We know the cost of stainless steel castors is higher however you're not going to be frequently replacing it. This will be a cost saving product in the long run. 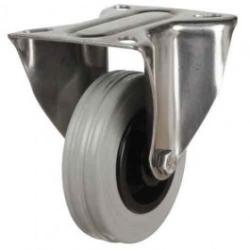 Yes, the second fixed castor we're going to introduce you to is also another stainless steel non-marking castor. I'm going to get these out of the way first as i feel that they deserve much more credit than they're given and to be honest, i think more people need to know that they exist as i've seen far too many cases where non-stainless steel castors have been used around moisture and i'm pretty sure it causes me to rust on the inside.

These stainless steel non-marking grey rubber fixed castors are available in other styles as well which include swivel, braked, bolt hole and bolt hole braked so if you did require a mixed set this is a possibility.

This particular castor to the left is our 80mm light duty non-marking grey rubber fixed castor capable of supporting loads of up to 65kg per castor. as we mentioned above it is available in different styles as well but it's also available with different wheel sizes that include 80mm, 100mm, 125mm, 160mm and 200mm. The load capacity per castor does increase when you use a bigger castor wheel, the largest in this particular range has a wheel diameter of 200mm and it's capable of supporting up to 205kg per castor where as the 80mm castor can only support loads of up to 65kg per castor.

You can view all of our SSDRGR castors here. 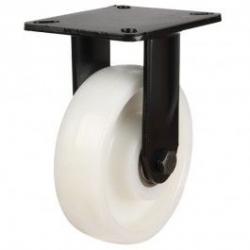 You've seen us mention heavy duty previously in this blog post and what may be heavy duty to some people isn't really heavy duty to us. This may make you ask "Well what is a heavy duty castor?" To us, these are true heavy duty castors. If you take the smallest fixed castor in this particular range alone which has a wheel diameter of 100mm it's capable of supporting loads of up to 450kg per castor! That's pretty impressive you've got to admit? Especially when you take into account the price!

This particular heavy duty fixed castor is from our series of LMHBNY castors which are also available as a swivel castor and a braked castor, They're also available in four different wheel diameters that include 100mm, 125mm, 150mm and 200mm. Now we've already mentioned that the 100mm fixed castor in this particular series can support loads of up to 450kg per castor and we've now mentioned that they're available with different wheel diameters it's important to remember that in most cases as the size increases so does the load capacity that castor can support. In this case the load capacity doesn't actually increase that much only going up by 50kg per castor on a 200mm wheel diameter to 500kg.

So, there are a few things that you need to know when you're buying castors.. I know, I know, It's not just as easy as buying the castor that looks ok for a decent price, You need to take a few things into consideration before buying.

Firstly we'd like to mention the wheel material that you're looking at, Some people don't actually take into consideration what wheel material they might need and just buy the castor that looks right, Yes, this will sometimes be fine but take this for example, You're buying your nice new fixed castors for a warehouse trolley that's going to be used both inside and outside on a variety of different floor surface types. If you picked a nylon castor and your expecting to be able to wheel it from your nice smooth warehouse flooring outside to tarmac where there are bits of debris and gravel on the floor you're going to be very disappointed the moment your new nylon castors approach one of those obstacles. You'd honestly be very surprised how hard it is to push a nylon castor over a tiny little bit of debris, Particularly when the trolley you're pushing is also carrying a heavy load.

Not to mention using the wrong wheel type could also damage certain floor types or even mark them. These are things you should take into consideration, if you don't want marks on your warehouse flooring we'd always advise that you stay away from black rubber as this is most likely going to mark your floors, Instead we would recommend a grey rubber or a blue rubber.

Working out the total load capacity that you need is also another big thing to think about, probably one of the most important aspects really. You'd be surprised though how many people don't know what load they're going to need their castors to support. I remember one example only from this year where a customer needed "Heavy duty castors" now as mentioned above, heavy duty castors to us is usually a completely different thing to the customer. I asked the customer if they could be more specific to which they replied "I just need the heaviest duty castors you have" My immediate reply was "we have castors here that people use to move tanks, Is this how heavy you would like to go?" In the end, it turned out they were only trying to replace the castors on an engine hoist in their garage and didn't know how much the engine actually weighed.

There are a few reasons that we ask what the load capacity is going to be and the example i've given above is mostly financial, the customer could have ended up buying castors that were way overkill for what they needed, as a result of that they would have paid much more than what they needed and those castors, yes probably would have lasted them a very, very long time but they would never have gotten value for money from this. We do aim to give all of our customers value for money and we do aim to sell them the correct product for their application.

Another thing to take into consideration when looking at your load capacity is how you work out the load capacity of your castors if you're buying a set that is. When we work out how high the load capacity of a set of castors is, we don't divide it over all four castors, we only divide the total load capacity over three castors. So example time, If we have four castors that can support 100kg each and we're selling them in sets of 4, we would only say that the set can support 300kg. That seems odd right? Why do we do this? Well, We do this for a couple of reasons, if these castors are on a trolley, the person loading it may not be stacking the trolley evenly meaning the majority of the load could all be stacked at the front end of the trolley. This would mean the castors on the front end were taking more of the load then the castors at the back end, this could very well cause them to fail. Another issue which poses the same risk are un-even surfaces, this would cause the same problem.