The beauty of these heavy duty castors lay in their cast iron core, this allows them to have a rather high load capacity but unlike pure cast iron castors, these castors also have a black elastic rubber treat which makes them less harsh on flooring and much easier for them to overcome debris on flooring. One of the down falls of cast iron castors without a treat is the fact that they can be very hard wearing on floor but they can also struggle with debris, even the smallest of debris can be hard for a cast iron castor to overcome. 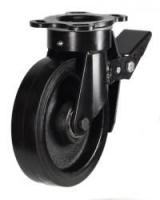