Blog › Information › The Adventures of Tonka the Trolley - Chapter 1 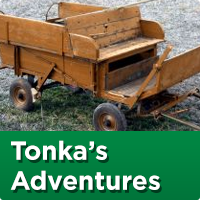 Have you ever wanted to build your own trolley...?

A very hard winter had been and gone but the roads were victims of the long frost. They were left pitted and pockmarked like the moon’s surface. As Tonka rolled along, his feet were killing him and he longed for rest and replacements. Tonka was a trolley, so named after the local policeman – Sergeant Tomkins’ nickname. His feet were four wheels one at each corner and originally 10” pram wheels with solid rubber tyres. The rubber on the front offside wheel and the nearside wheel had long worn out and disappeared and the result was a jarring, juddering journey wherever they went.

They were five intrepid children between 8 and 11 years who travelled remarkable distances with Tonka, always pushing, pulling or riding on his long body. The 3 boys were William, Bobby and Shane and the 2 girls Sharon and Elizabeth.  Corporately they were known as the ‘Goolees Gang’ – the alliteration appealed to them even though they didn’t know it as such. The name emerged apparently after Shane had heard his father threaten reprisals on an erring motorist! The gang had built Tonka, having helped themselves to 3 6ft long wooden planks and 2 pairs of pram wheels from the local council tip. They gained access by loosening a railing gradually until they could remove it and squeeze through. Bobby’s father worked at a local engineering works which had numerous trolleys and vehicles of varying descriptions, all of which ran on wheels or those things called castors.

William, as the eldest and natural leader, wanted castors for Tonka’s comfort and mobility but Bobby’s father had drawn the line at redirecting some from the works. The Goolees thus decided to obtain their own and Bobby’s dad then helped with the building of their wheeled hero. They had justified taking the wheels and wood by the simple expedient that they were scrap items and in the yard, an area they had heard garrulous men emerging from a pub described as ‘owned by the people and the ratepayers’. While seeking the wheels, - after 6pm when all had gone home, - they saw several different wheels and castors with both rubber and polypoopy tyres – that was as near as they could get to the pronunciation – but most were attached to big awkward items and could not easily be removed. The 10” pram wheels were therefore taken as their main item in the new transport and were lashed on back and front with thick string. There was thus no facility for steering which was to prove a wretchedly painful existence for Tonka and a spasmodically bruising experience for the Goolees. From such beginnings did the adventures begin.