Blog › Information › The Adventures of Tonka the Trolley - Chapter 4 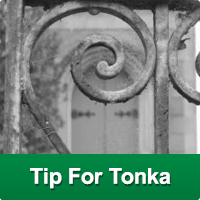 The two girls seemed naturally to assume the quasi domestic role of tea making and quietly boiled a kettle which was there permanently for Shane’s father, who had provided a gas bottle with a ring for heating. It seemed he often went to the shed whenever he had a difference of opinion with Shane’s mother! She did watch a lot of cowboy films on the TV which is how Shane had acquired his name.

William quickly got them to concentrate on the business of getting hold of some new wheels or castors for Tonka. It was becoming embarrassing and he was going to be busy in the coming weeks. They therefore decided to pay another visit to the commercial tip near to Rotville. As they quickly pulled Tonka along, two at a time taking turns to be the ‘engine’, the sheets of Tonka clanked and jumped and the rubber tyres remaining on the two wheels gradually began to fly off every time he pulled Tonka over a hole or up a gutter. The gang’s mission was to get Tonka some new wheels or even clever castors. It seemed it would be better if they could find rubber tyred wheels or castors since they were quieter and they could avoid the unwanted attention of adults and rival gangs.

They arrived at the council tip at 7.45pm and it was of course closed. The large steel gates, themselves on cast iron wheels to assist opening and closing, were locked and forbidding. That did not deter the Goolees; they quickly located the loose railing round the back of the site and got to work, shaking, pulling and pushing until they could ease the railing upwards and put their box, end on, underneath to prevent it dropping. They could see the council lorries, each with 8 or 12 big rubber tyred wheels, standing silently at this time, as did the whole site. One by one they eased themselves under and through the railings.