Blog › Information › The Adventures of Tonka the Trolley - Chapter 5 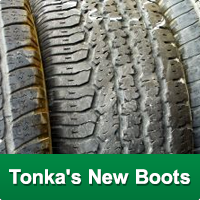 The council site was quite large and had an enormous variety of scrap cookers, washers, garden machinery and other uncategorised items. Agreeing what they were looking for, they spread out and went to work. Bobby had tied up Tonka to the railings so he could rest awhile and contemplate what the gang were up to. It never occurred to him that they were unselfishly trying to find new boots, i.e. wheels for him. As he stood outside he could hear heavy lorries, noisy because of their engines and loads, but relatively quiet on the road because of their large rubber tyred pneumatic wheels. He longed for some of the same. A passing dog relieved himself on Tonka’s back wheel and jolted him back to reality.

The gang meanwhile were scanning the site for items to enhance their loved trolley’s status. It was little Sharon, as tenacious as ever, who first found a 6” diameter rubber tyred wheel, while Bobby had found one of those polypoopy tyred castors with 4” diameter wheels and what appeared to be a brake. Elizabeth did not really like getting dirty but found a box which, on examination, spewed out a collection of wheels and castors of differing sizes. Shane found 4 cast iron wheels and William found several lengths of steel rod which, as the oldest, he thought might be useful.

They found a few other items of interest including a bag of screws and nails and, with their new gotten gains, returned to Tonka. Carefully replacing the railing they examined their spoils and arranged to meet after school and term tomorrow. As Sharon, the youngest had to be in earlier, they loaded up Tonka the trolley and, accompanied by the squeaks and groans of his wheels, made their way happily home as the sun began its descent into dusk.