Blog › Information › The Adventures of Tonka the Trolley - Chapter 6 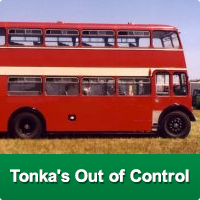 The next morning rain had made the roads and pavements wet and a little slippery. Bobby had a regular paper round for which he found Tonka invaluable. He fetched the newspapers from the village shop and loaded up Tonka for the daily rush. He had to deliver everything in less than one and a half hours in order to get to school. He started on the south side of the village until reaching the top of Acre Hill. His method was to leave Tonka at the top of the hill and walk with papers down a side of a street at a time. He put a brick, always with him, under the front offside wheel and set off. He had delivered down the one side of the street and was at the bottom ready to ascend the other side, when he heard an off-beat clanking. Looking in the direction of the sound he saw Tonka, wheels going devilishly ten to the dozen, careering down the hill towards him.

The remaining papers were scattering all over the place and the wet, slippy surface induced the tyreless two wheels to clank and slide out of control. Tonka, unable to control himself - a sort of trolley incontinence – veered into the road.

Coming up the hill was a bus, the older type double decker, its large pneumatic rubber tyred wheels gripping the road effectively, and picking up passengers for Rotville. The driver saw Tonka out of control and applied his brakes. The sudden change of velocity caused the bus to skid and Bobby to run towards Tonka.

Suddenly appearing out of one of the houses was Shane, carrying the rope that his cowboy loving mother encouraged him to carry. Cowboy skills were not lost on Shane and he unfurled his rope with ready-made loop and, swinging high and wide aimed his lasso at the galloping Tonka. The bus driver finding his wheels slipping, looked on in horror!