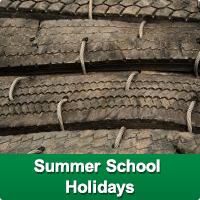 The first day of the long summer school holiday, often characterised as “Teacher’s rest and Mother’s pest.” The constituent members of the Goolee gang, each in their own environments, woke early with excitement. It was Saturday and Bobby dashed outside to review the state of Tonka the Trolley, sad and drooping because one of his front rubber wheels was adrift and wondering whether he would have a summer activity holiday with the gang.

The 3 remaining wheels were not in a good state. The front and back offside still had rubber tyres after a fashion but the back outside wheel having long lost its rubber tyre was now, after the accident, leaning heavily and really wobbly. Something had to be done and first Bobby had a paper round to do. It would not be as easy without Tonka to take the strain but he rang the rest of the gang and arranged to meet at the allotment shed after breakfast. He managed his paper round but it took him considerably longer, while his Father was working overtime and needed to be conscripted to the cause.

They met as arranged and William quickly outlined what they must do. They had stored their new gotten spoils from the council tip in the shed and sorted through the various wheels and castors before deciding on 2- 150mm diameter rubber tyred wheels and 2- 200mm diameter rubber tyred wheels all with aluminium centres. William used the metric measurements because his class at school were learning both imperial and metric measurements. The others didn’t understand but Sharon, the youngest but very astute, found the round bar that William had discovered and with knowledge well beyond her years, suggested that the wheels could be fitted on the end of the bars.

They gathered everything up and lifting the ailing Tonka onto his back wheels, they set off on the 2 mile journey to the factory where Bobby’s Father worked. They were going to have to be very persuasive and to that end bought a packet of cheese and onion crisps and took a newspaper from outside the shop. Shane insisted they were free since they had a free newspaper every Thursday.

Would crisps and the newspaper be enough to recruit Bobby’s Father...?