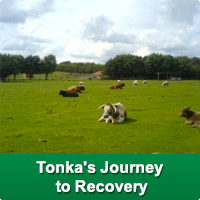 The Goolee gang gathered everything that might help them in their task including the push scooters that Sharon and Shane owned. Two of them at a time would have to lift Tonka onto his back wheels – even though one was wobbly – and pull him along with the rope. They had used string to tie the tool box onto Tonka’s back and into which they loaded the 2 – 200mm rubber tyred wheels and the 2 – 140mm rubber tyred wheels. William carried the steel bar using it as a walking stick on occasions until he got tired of the weight. Elizabeth had the smart idea of binding it with string to Tonka’s body.

They knew all the short cuts. At first through various back alleys where the rubbish bins of the house were parked. Tonka viewed with envy theses waste bins as they sat majestically on their 2 – 150mm dia. Rubber tyred plastic centred wheels. Eventually clearing the village they crossed over a stile into fields, green from the spring rains but browning quickly with the summer sun. They had to combine to lift Tonka over the stile and as they seemed to be clearing it, Shane tripped while avoiding a large cowpat and loosed his hold on Tonka. Over the trolley went at least on the right side of the fence, but came down with a thump. A spasm of pain shot through his left front side. He had sprained his ankle. The Goolees recovered their equilibrium and continued on their journey pulling Tonka along on the tufted grass. The pain quickly disappeared when alerted by the smell Tonka realised he was carrying a squelched up cowpat on his bottom.

Could his dignity ever recover?