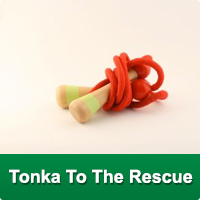 The flow of bicycles stopped and for a time at least all was right with the world. It was hot and sunny, the ducks in the canal squawked their mating calls to the less gaudy females and roach and stickle backs darted flee tingly beneath the surface.

Tonka sighed deeply wishing for all the world that he could have new comfortable rubber tyred wheels to ease the pain he was feeling. Elizabeth had stowed a skipping rope in the tool box and withdrew it ready to use. The Goolee gang set off again, two at a time pulled him along the tow path, aptly named in the instance. Suddenly the peace and tranquillity was broken and another wave of cyclists advanced towards them. Their 24 inch pneumatic rubber tyred wheels fizzing round and driven by sophisticated gears, carried their riders at a frightening pace along the canal side. There must have been a school for bad tempered cyclists because some of them shouted uncouthly for the Goolees to get out of the way.

Elizabeth was enjoying her inventive skipping ahead of Tonka when the first cyclist whizzed so close to her that she fell into the ditch and hedge and let go of one of the skipping rope handles. It caught in the spokes of the back wheel of the cycle and pulling the rope from Elizabeth’s hand went into a skid and the cyclist cursing as he did so, went over the handle bars and with a resounding splash disappeared beneath the water. William and Bobby who were pulling Tonka jumped aside and our ill wheeled hero followed the cyclist into the canal and disappeared under the surface.