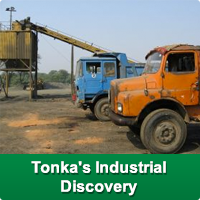 The two boys had fortunately not let go of the tug rope and recovered quickly. They pulled Tonka out of the canal, who emerged with 4 wheels spinning and distinctly wet. But definitely cooled off. The other cyclists hurled volleys of abuse at the Goolees who, with remarkable gathered themselves together and pulling Tonka in their wake, ran like hell.

Elizabeth had recovered her rope and Sharon and Shane had their scooters to make a quick getaway. Tonka’s 4 almost rubber tyred wheels were now really aching and the fast getaway worsened the pain. Receding behind them the cyclists were recovering their drenched member from the murky waters. Fortunately at less than 3 feet deep the submerged man could stand up and the, feeling gingerly beneath the surface could locate the pneumatic rubber tyred wheels and extricate the machine from its watery grave.

The Goolees did not wait to see the result but fled alacrity. After a few hundred yards they stopped and hid behind the hedge in case the mounted mob came after them. While waiting they noticed that on the other side of the hedge was an industrial scrap yard and their eyes goggled at the riches within. There were scrap cars all with pneumatic rubber tyred wheels. There was agricultural equipment, some of it was cast iron or steel wheels to move it and there various other trolley type vehicles each having castors, both rubber and polyurethane wheeled, many of which were fixed or swivelled.

There were various cranes on huge wheels like great prehistoric beasts prowling the landscape. To top all of this was a conveyor to carry items from one area to another. This had outlying jockey wheels and spinning round the conveyor rollers clanked and sparked. This was an amazing new find for the Goolee gang and their imagination ran riot at what they could do with these wheels and castors...