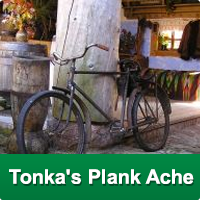 Tonka having rested now viewed the large scrap yard with wonderment and not a little envy. The recent excitement had increased his discomfort and the extra weight of the tool box was now causing him to have backache – or in his case plank ache. The gang waited ten minutes then, seeing no perusing cyclists emerged from the hedge and continued on their way.

The wheels on the trolley were now perilously loose and in need of hospitalisation. They passed the factory where Bobby’s Father worked, viewing it across the canal but not able to access it there. Several hundred yards further they emerged at the entrance. To either side of the drive in were car parks and cars aligned all with pneumatic rubber tyred wheels and several motor cycles, similarly endowed. There were also two large trolleys similar to Tonka but towering above him with large cast iron wheels and each with a tow bar. These were obviously important enough to warrant being pulled around by a large motorised tractor with huge rubber tyred wheels having deeply impressioned treads. They both carried loads of steel sheets and sections of different shapes. The Goolees were to find out that these were variously referred to as joists, channels and angles.

William, Elizabeth and Bobby decided to approach the gatekeeper, leaving Sharon and Shane to look after Tonka. They approached Harry who was sitting on a three pronged swivel chair having furniture castors at the extremities and asked to see Bobby’s Dad. When asked they said he worked in Millwrights Department and as the time was 12.30pm and it was Saturday they engaged seeing hundreds of men and a few workmen hurrying out of the entrance. Their week was finished and they would no doubt enjoy what was left of the weekend as they departed in cars, motorcycles and bicycles all having comfortable rubber tyred wheels.

Tonka signed and deeply envied this comfort. Now they needed help from Bobby’s Dad and quickly withdrew the crisps and newspaper from the tool box ready to practice their powers of persuasion...