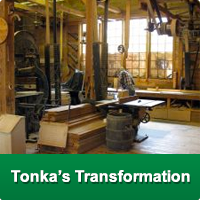 Harry the gateman was very tall and beetle eye browsed that rather intimidated the children but was helpful enough to say that Bobby’s Dad would be leaving work and coming over any moment...

They waited but 5 minutes before Alan, for that was his name, appeared and registered surprise to see the five children. They tugged Tonka into sight and handling the four rubber tyred – or almost four – at the corners, explained that they would like him to help refurbish this weeping and wilting trolley. To that and they revealed their bribe of crisps and the newspaper. Alan agreed, since they had come two miles to see him, and arranged with Harry to return to his department with the children and the ailing Tonka.

To see inside the factory site left them wide eyed and excited. The great rapier cranes with very large steel rimmed wheels were used on the materials stockyard. Passing through the machine shop they were amazed at the numerous trollies all furnished with posh polyurethane tyred castors and most loaded with large fabricated tanks and templates awaiting machining. They were shown into the maintenance shop by Alan who explained that to return Tonka to normal he would require new wheels and axles and he would not be able to use factory items. At this point the Goolees triumphantly open the tool box and revealed the two - 200mm diameter. Rubber tyred wheels and the two – 150mm diameter rubber tyred wheels and – the piece de resistance – the 1 ½ diameter Steel bar.

All was set and Alan got to work cutting the bar to produce two axles and drilling small holes through each end to take locking split pins. He made 4 trunnions out of blocks of wood through which would pass the axles and screwed them to Tonka’s body at each corner. He fixed the 200mm diameter wheels to an axle and passed it through the Trunnions to the other side and fixed to the other wheel. To split pins held the wheels firm.

Now sporting new back axles and wheels, Tonka glowed with pride as he realised that his painful journey had been made to give him a renewed life. He couldn’t wait for Alan to complete the transformation and in his excitement only just avoided leaving a tell-tale puddle in the maintenance shop!