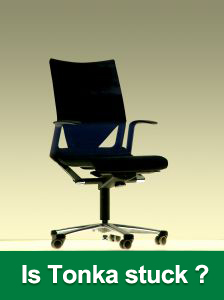 Tonka did not have time to consider romantic implications of his strange feelings for these waste service castors before he was pulled sharply onwards along a factory road. They passed a tiny office with a door open and Tonka and the gang could see the desk and chair in the fine office. The chair bore office chair wheels, dainty chrome plated wheels, which our hero observed with pleasure. He surely couldn’t be in love with different wheels so soon and realised that this world opened up many other possibilities, perhaps not monogamy, not yet at least.

William had been leading the small procession when a great clanging noise from the adjoining factory bay startled them all. Elizabeth following just behind William gave a short scream and hung onto Williams arm fervently. He rather liked this and grabbed her hand. Ah thought Tonka perhaps this is catching.

The last action of the factory week had taken place and a large fabricated base plate had been lowered noisily onto a steel trolley. Tonka, all eyes now, couldn’t help but notice the four large heavy duty castors on the trolley and the two at the front were winking at him. Well they were swivelling in fact. Tonka’s rubber tyred wheels did not swivel but, he smugly thought, they do steer through the ingenuity of Bobby’s Dad, Alan. Shane and Sharon were now both astride Tonka and Bobby, William and Elizabeth were pulling them along quite easily because of Tonka’s lovely new replacement rubber tyred wheels.

On instruction they turned into the machine shop and fitting shop, where a great conveyor lay silent, its jockey wheels and conveyor rollers still. As they passed from concrete floor to cobbles Tonka’s left rear wheel dropped and became stuck between the two floor surface. The gang tried several times but couldn’t move him.