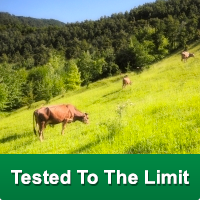 As they followed the canal tow path they came to a bridge which crossed over the canal and an adjacent river, following a parallel course with the canal. They proceeded up the exit slope and went left. After about a 100yds to the side was a long grassy slope down to another field. They had a quick conference and decided to test Tonka to the limit. They positioned him at the top of the slope and all the children climbed aboard the long woody body of Tonka. They had to leave the scooters at the top.

Sharon and Shane, as the smaller of the five, sat on the tool box at the rear, Elizabeth and Bobby positioned themselves side by side in the middle section and William sat at the front holding the tee bar with which to steer. But how to start Tonka moving...?

At the bottom of the slope they could see a farmer’s tractor with 4 huge rubber tyred steel wheels holding the tractor body above the grass. They must not hit the tractor at all costs. Eventually the gang worked out that if Sharon and Shane, sat higher up on the tool box, pushed off with their outside legs they could get moving. They did so successfully and Tonka with his large load aboard started the descent. He had never been in such a healthy state and his 4 rubber tyred wheels gathered speed and fairly hummed along, the speed increasing rapidly down the slope.

William had never steered at this speed and began to be frightened. He realised he wasn’t fully in control and there was no way of stopping. As Tonka excitedly gathered speed he realised his meeting with first, the waste service castors and then the beautiful chrome furniture wheels. He was suddenly startled as the Goolees all started to shout and shriek. They were heading at great speed and on course for a collision with the tractor. The 4 huge rubber tyred industrial wheels loomed up and they all awaited the crash!