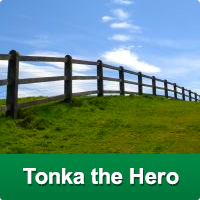 William was holding onto his tee topped steering bar and was frightened to turn it left or right in case Tonka overturned. As they gathered speed and the tractor and its 4 huge steel centred industrial rubber tyred wheels loomed ever closer, the children were quite shaken and shouting for help though Sharon was secretly enjoying it. None would be forthcoming out here. Two mole hills jolted Tonka off course and his rubber tyred wheels fairly fizzing, they careered towards the tractor.

If they hit three huge steel wheels they would be in trouble and importantly, their newly refurbished trolley would be a wreck. Tonka’s end drew nigh. As they were near to collision Bobby grabbed Williams arm to steady himself and instead caused his driver to jerk the steering bar to the right. The sudden change of direction threw Shane and Sharon off the tool box at the back and they landed heavily on the grass, rolling over and over down the slope. The trolley’s direction was altered suddenly but the replacement rubber tyred wheels held their own and still headed for the huge tractor wheels. The 3 children left aboard were now petrified and flattening themselves against Tonka’s body held on for dear life.

Tonka realised the great danger and, confident in his new rubber tyres to react, shifted his weight so that the front wheels turned slightly to the right. Tonka hurtled under the body of the tractor just missing the great wheels, but emerged and careered down the slope precipitously. At the bottom, there being no way to stop, Tonka shifted his weight again and he overturned onto his side, spilling the 3 frightened children onto the grass at the bottom of the slope. Sharon and Shane had continued their roll down the field and arrived in time to bump into William, Elizabeth and Bobby.

They were bruised but safe and realised with incomprehension that Tonka, the hero, had saved them!