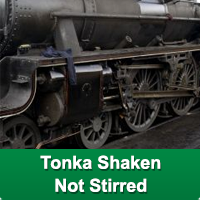 Shaken, but not stirred, the Goolee gang brushed themselves down and examined their 4 wheeled hero. The tool box had come off but that could be easily returned to its position. Tonka’s main body seemed intact and looking apprehensively, they saw with relief that all four rubber tyred wheels were in good condition and nothing further amiss.

They quickly worked out where they were and decided that they could get home another way. They would be passing the railway station and could note a few engine numbers down. They had all recovered very well and were in fact tingling and exhilarated. What adventures these were with Tonka in such good form. As they approached the railway station they had to wait at a level crossing. The train passed into the station, its great steel wheels clipperty clopping over the rail joints. They waited for the spring loaded gate castor to move aside, the crossing gate then proceeded into the station.

Immediately Elizabeth pointed out several trollies riding higher than Tonka with large steel polyurethane tyred wheels and a forward guide bar to steer. They were being used by men and somewhat bonny women to handle luggage on and off the train. Then William and Bobby pulled Tonka onto the platform and he stood alongside the large train wheels, half hooded from sight. Tonka looked but did not feel the same way he had felt about the bulk handling castors on the chrome office chair wheels. This was certainly not love at first sight and anyway he wasn’t free like him to go almost anywhere, restricted as they were by the rails on which they ran. Large wheels they might be but Tonka felt decidedly superior to them. However he realised he would not want to fall out with them.