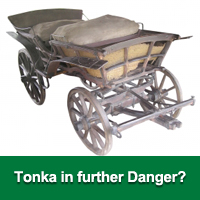 The train’s diesel engines started to rumble and roar and William, Elizabeth and Sharon looked on in horror as they observed what was happening on the train.

Other people too could see a big problem arising and a man and a woman pulling a large wheelie bin trolley dropped their tug bar and dashed towards the endangered Tonka. The doors closed in on our frightened trolley and he braced himself for a buffeting. Just as he expected a painful bump, there was a loud hissing and the doors clanked to a halt then withdrew to their open position.

Bobby and Shane jumped off the train pulling Tonka with them and dashed to the back of the platform. Our shaken trolley came to rest beside some waste service castors on their parent trolley. After the fright Tonka longed for a comforting hug and he thought the waste service castors were just the ones to do it. Before he could fulfil his earnest desire Bobby had pulled him roughly towards the exit gate and was followed by the other members of the Goolee gang.

Many people were leaving the station pulling their luggage cases on plastic furniture wheels. Some bigger cases were on polyeurethane wheels and as they passed an office Tonka caught sight of tables and chairs, these latter being on his beloved chrome office furniture wheels. On such scope for romance! As Bobby pulled him to the right he could look behind to the platforms and could admire four blue wheels on a trolley.

Concentration having been diverted, they made to cross the road and to their horror a great cart with large spoked aluminium wheels was being pulled by two huge shire horses. Their great hooves closed in on Tonka...