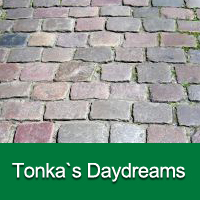 The children stopped in their tracks and retreated but Tonka was left shaking in the cobbled road. The two great and very handsome shire horses stepped over Tonka with, first front legs and then back legs and stopped so that our troubled trolley was behind the horses but before the cart. Before Bobby could tug Tonka away one of the horses took the opportunity to relieve himself. It was a shire horse and a deluge ensued. Tonka was drenched and looked at his new rubber tyred wheels as they took the brunt of the storm.

Just as he was being pulled clear of the rear side horse, the now stationery animal also decided to divest himself of his last meal and a great plop fell on Tonka. As he was pulled clear two large trolleys were drawn up alongside the cart. The first had four large pneumatic tyred castors and the other four large heavy duty red polyurethane wheels. Tonka regarded his array of talent with interest and would have liked to stay but, truth to tell, he wasn’t in the best condition for flirting with handsome polyurethane wheels or sturdy pneumatic tyred castors. He needed the bathroom and a wash and brush up.

The Goolees, pulling Tonka away from the action, crossed the road and headed for home. They still had a mile to go and it was past tea time. They and our romantic trolley noticed the passing traffic, all having automotive wheels, all pneumatic rubber tyred and a Jaguar car, then a Land Rover passed, shining like new pins.

Tonka, having been restored in a factory, he imagined himself in the Jaguar Rover factory being useful, carrying various components about. As he rumbled along dreaming of an industrial future, Shane, who was now pulling him, failed to avoid a flexed steel notice board on the pavement. Tonka clattered into it with some force. He winced but noticed the advert on the board. Wheels for sale!