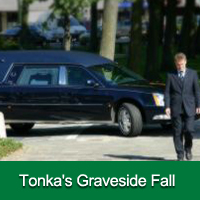 The local vicar, dressed appropriately, intoned the words of the burial commitment service, and the people gathered round made reply to each supplication.

This moving ceremony completely silenced the Goolee gang and Tonka, not understanding the nature and purpose of the events, took the opportunity to imagine further contact with the waste service castors and the chrome office chair wheels to his unbridled delight.

The service being completed, saw the coffin pulled on to the trolley with twenty inch diameter rubber tyred wheels towards the open grave. The assembled mourners parted to let the trolley through and that movement was enough to cause Bobby to trip and fall. As he was holding Tonka’s rope at the time it yanked our dreaming trolley sharply towards the open cavity. As the funeral party moved to the graveside with the coffin trolley whose large pneumatic rubber tyred wheels made no sound, the whole company was thrown into disarray as, in astonishment, they saw Tonka fall precipitously into the open grave. With a bump and some strain on his axle our troublesome trolley pitched into the gaping cavity – and disappeared.

Consternation all around was the word and the previously silent and reverential mourners began to hiss and tut tut. A few who had previously inhibited at the local hostelry began to snigger. Bobby, helped now by William and Shane rushed forward and, flattening themselves on the grass, reached down and grabbed Tonka’s rope. They pulled, somewhat in panic which exhausted their strength, and the 150mm rubber tyred wheels appeared over the side of the grave. Others were now moving into help – or condemn – and that made the boys pull harder till Tonka appeared out of the grave.

The significance of such an episode was beyond the comprehension of the children but did not escape the minds of the assembled adults. A long communal gasp ensued and the vicar moved towards the children...