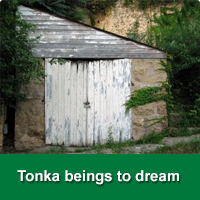 Despite the odious irascibility of the woman in the disabled vehicle, the two older boys at the front stopped and rushing round stopped the vehicle from tipping over into the road just in time. The other three shaken a little by the collision, also disembarked and the five of them heaved the disabled vehicle to its upright position and the gnomic woman back into her seat.

All our children had been raised to be well mannered and were sadly disillusioned when no words of thanks were forthcoming from the old lady and she urged her electric vehicle on without another word. However Tonka noticed with some satisfaction that one of the vehicles large back wheels was running oddly and crookedly. With some delight he realised he had come off better after his first altercation with other rubber tyred wheels. He would show them!

They were nearing their homes now and they noticed the refuse collectors collecting the wheelie bins on the wheelie bin trolley, before transferring them onto the tipping mechanism on the lorries. They had never noticed before how the jockey wheels guided the mechanism to pick up the bins, deposit the rubbish in the lorries and then return the bins to the floor. They arrived back in St. Stuffly rather late for tea, or dinner as William and Elizabeth referred to it.

They went to their respective homes tired out but elated after a very busy day. Bobby who looked after Tonka, took him home and put him in the garage, deposited next to the large automotive pneumatic rubber tired wheels of Alan’s car. The darkness of the garage as the day turned to night led Tonka to think of all he had endured that day and been transformed from a cripple to a trolley that was strong on 4 rubber tyred wheels and could rise from the grave and take on an altercation with a disabled vehicle. Tonka began to dream....