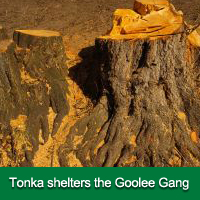 They quickly pulled themselves to their feet and, with Shane and Bobby jointly pulling Tonka, they ran towards the far side of the field with the rain hammering down on them.

They needed shelter but where in an open field? Spinning round like mad, Elizabeth suddenly stopped and pointed out two tree stumps about five feet apart and cut down to a height of four feet.

William quickly worked out what to do. They stopped and, as instructed, took off the tool box from Tonka’s main body and with all helping heaved him into the air and across the two tree trunks. The activity had left the four rubber tyred wheels spinning around in the air because they had turned Tonka upside down. He didn’t like this at all and his dignity suffered until, as all the children sheltered under his body, he realised what a very important part of the gang he now was. And he got a free wash and brush up. He was not just some wheel about.

Eventually the storm subsided and the Goolee gang, each still very wet, retrieved Tonka from his arboreal roost and, leaving the field made their way across a churchyard towards another track. As they did so a large black hearse followed by three large shining Rolls Royce Cars, themselves forbiddingly black, drew up with their large automotive pneumatic rubber tyred wheels, swishing through the collected puddles. The gang watched in astonishment. Out of the church was wheeled a large trolley on twenty inch diameter rubber tyred wheels and pushed towards the hearse. The back doors were opened and a shiny wooden coffin was loaded onto the trolley.

The children, though young, regarded all this and began to feel a bitter sadness.