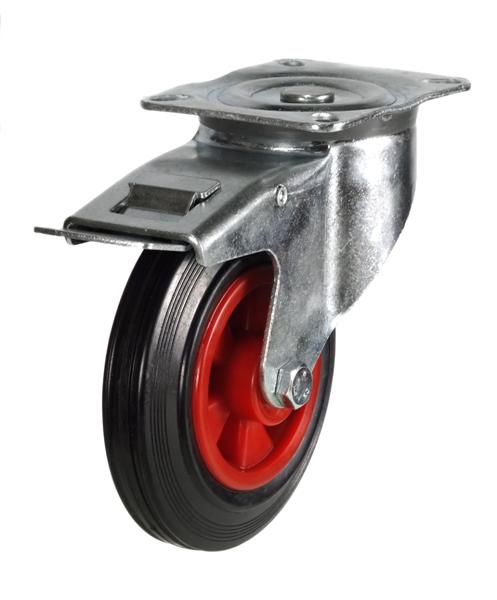 Common castors may include a brake castor feature, this, when the foot brake is applied, stops the castor wheel from turning. This is commonly achieved using a brake lever that presses a brake pad against the wheel causing a strong friction effect.  However a wheel bra A more complex and more effective brake type of swivel castor, sometimes called a total lock castor or swivel braked castor or just braked castor, has an additional swivel lock on the castor head.  This locks both the swivel action of the castor and rotation of the wheel, thus providing a very rigid castor. Braked castors can be used either singly or more commonly as a pair.   As a pair they can be positioned in opposite corners preventing the trolley from movement when knocked.  The most effective braking is gained when all castors are braked or locked.   Another consideration is the position of the brake pedal when an item is either pushed or pulled.   Brake pedals are commonly fitted as “trailing” i.e. when pushing a trolley the castor will rotate on its offset so that the brake pedal is accusable from the back.   The alternative, found mostly on waste bin castors, is a “leading brake”.  This means when pulling a waste bin the brake pedal is available at the front thus meaning the operator does not need to move around the bin to apply the brake.

Typical positioning of castor can be seen here;