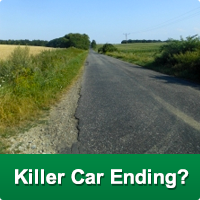 The sun was now getting higher and its heat was taking its toll on the Goolees as they pulled Tonka along. They rested to snatch a drink of squash and nibble some biscuits. This royal feast did not go well with the smell emaciating from Tonka’s bottom, so they resolved to try and clean him up with grass. They had forgotten the toilet paper.

As they laboured across the fields any two children at a time had to push and ride the two scooters. Shane’s machine was a little larger then Sharon’s and had two plastic centred wheels with rubber tyres, one back and one at the front. It was not always very stable and different children found it difficult to stay upright. Sharon’s slightly smaller machine had three wheels 75mm diameter with one at the front and two in parallel at the back. This proved rather more stable.

Over a hedge a farmer – or more likely one of his Polish hired workers – were beginning to harvest grass ripened by the mid- summer heat. The tractor ran on very large steel centre wheels with rubber tyres having enormously deep treads. Tonka looked on enviously and wondered at this stage what the journey was about and where it would end. Soon, he hoped, for his remaining wheels were aching awfully. They were now leaving the fields and opening a gate made easily moveable by a cast iron heavy duty wheel, they emerged onto the road. It was now considerably noisier as cars and the occasional bus and lorry, all Tonka observed, having posh rubber tyred wheels, rushed by. They paused before starting to cross the road. They were a third of the way across when round to the bend at a great speed a W registration open topped car roared towards them, tyres screaming with 6 young people wildly shouting and bawling. Bobby and Elizabeth, for it was they who were in charge of the rope at the time, suddenly dropped and ran for the footpath to avoid the motorised party from hell.

They realised they had abandoned Tonka in the road and the wild killer car was bearing down on our favourite trolley with evil intent...