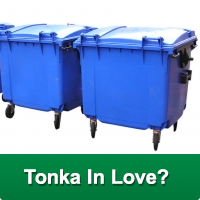 What adventures were promised?

They were now travelling smoothly and by past standards quickly round the factory roads. On the one side adjoining the canal was the stockyard, where lay piles of steel plates, joists, channels, angles and box sections. Two cranes, now still and silent for the weekend towered over the scene. Their large steel centred wheels gleamed in the sunlight. Other smaller trollies had blue wheels to run on and although Tonka noticed these with admiration he was not envious any longer, because he felt his own replacement rubber tyred wheels at each corner, were a match for anything.

They passed by the stress relieving furnace, gas fired but now silent for a day and a half. The children as the Goolee gang saw the rail tracks carrying a bogy having 4 high temperature wheels, flanged to run on the track. All the children were open eyed and amazed at the different sights they could see in this factory. Sharon and Shane immediately resolved that this is the sort of place to work and spend your life. Naivety is quite becoming in children.

Tonka felt that he was at last in a world he could be comfortable with. Here were trollies he could socialise and flirt with, having polyurethane tyred wheels or castors with swivel facility – just like me thought Tonka. They turned a corner and Bobby, now driving failed to stop and piled into some large bins. Tonka winced with pain but immediately forgot the discomfort as he came to rest next to some waste services castors. He suddenly felt a lightness in his being. He liked these castors a lot...