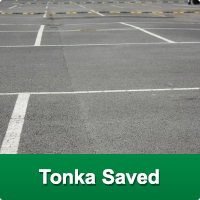 Pull as they all did they could not get Tonka moving and wondered what they could do. Alan summed up the situation and mounted a fork lift truck which stood on thick rubber tyred industrial wheels. Starting the motor he made towards Tonka and positioning the forks under his long body, began to raise him.

The Goolee gang looked in amazement as the fork lift truck lifted Tonka out of the trap and moving him clear, dropped him not too gently onto the cobbled floor. Our hero was jolted out of his reverie, contemplating all these new and exciting things that were happening to him and the children. He realised that the drop and the jolting did not hurt him as much as previously and he correctly reasoned that this was due to his new rubber tyred wheels.

The children had watched this operation with a mixture of awe and excitement. School had nothing like this. They could now proceed on their way to the car park and exit, and at the car park chorused thanks and goodbye to Bobby’s Dad, Alan, as he started his car. As he left Tonka saw the large pneumatic rubber tyred wheels disappear up the road. The Goolees now had to get home but this was now more of a pleasure as Tonka on his replacement rubber tyred wheels ran so smoothly.

They retraced their steps onto the canal towpath and joyfully continued each holding hands and pulling Tonka along. William and Bobby as the strongest pulled the trolley with the 3 others astride our mobile hero. They were rather crowded because they had to carry their scooters each having their small industrial wheels which rubbed abrasively against their knees.

Do you think they could ever get 5 children aboard Tonka...?