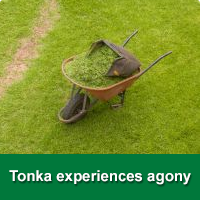 Rather out of breath now the Goolees slowed to walk and as they passed some rather posh houses with large front lawns, one of the inhabitants was mowing.

He sat aloft a large motorised lawn mower and Tonka noticed the quite large industrial wheels on which it ran. These rubber tyred wheels were large, rather in tread than diameter and Tonka wondered why this was so. He was not yet to know that the wide rubber tyred wheels spread the weight more evenly and reduced downward pressure, so as not to damage and wreck the lawn. So many things for our hero to learn!

As they were passing another smaller machine, Tonka noticed it had small industrial wheels and was being used by a lady to pick up grass and leaves. Near the house on a patio was a wheel barrow with one large rubber tyred wheel barrow wheel and another small trolley with small nylon wheels. Tonka had not seen these nylon wheels before and thought them, condescendingly, rather cute. But not as nice as his chrome furniture wheels. Oh to be near them now!

The Goolee gang moved on, now with William and Bobby pilling Elizabeth, Shane and Sharon aboard Tonka. Elizabeth delighted in steering him, but they were suddenly aware of a shout from behind, as a gruff old lady rather furiously directed her electric disabled vehicle towards them. She had no intention of slowing and was probably in danger of exceeding a speed limit when she collided with Tonka. Her large rubber tyred wheels interlocked with Tonka’s rubber tyred wheels and he experienced agony until he noticed with some satisfaction, that the disabled vehicle was tipping over and the grumpy old woman was about to fall out...